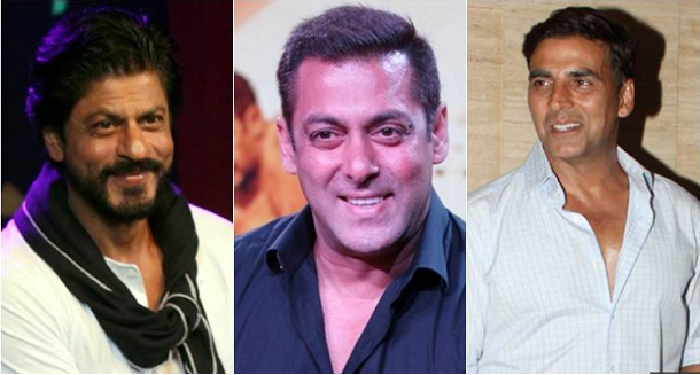 Forbes’ list of top 100 highest paid global celebs is here and all Shahrukh and Salman are on it and so is Akshay Kumar.

Forbes has recently released its list of the top 100 most paid global celebs. Since this is a global list-there are not many Bollywood celebrities on it. But-the very famous khans- Shahrukh and Salman have made it to the list. What is surprising is the entry of Akshay Kumar to the list. These celebrities have done so well this year that they have made it to the list. Shahrukh Khan is leading the way at 65th position with $38 million in earnings this year. Next is our Bhai of Bollywood-Salman Khan at 71st spot earnings of about $37 million. Apart from these Bollywood celebs-Akshay Kumar has also made it to the list at 80th spot with about $35.5 million.

The top of the list is our very own badshah of bollywood-Shahrukh Khan. Raaes had timed it correctly by releasing on the republic day. In spite of its clash with Kaabil-the movie earned more than 150 crores in total. Last year-Sharukh was at the 68th position with $33 million. He has made definite progress this year. Advertisements have also contributed a major share of his earnings. Many of these products are unheard of in the global market but bring fat cheques home for Shahrukh Khan. Serial killers who can give you goose bumps.

These India vs Bangladesh memes will heat up the match for you.